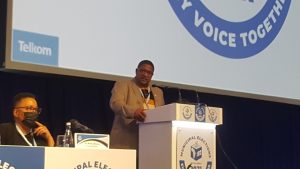 The Independent Electoral Commission (IEC) says over 3.5 million people have voted in the Local Government Elections so far.

South Africans are set to cast their ballots until 9pm on Monday.

Speaking at a media briefing at the Results Operations Centre in Pretoria, IEC Chairperson Glen Mashinini, says voting is progressing well across the country.

He says, “In KwaZulu-Natal, 20 voting stations did not open on time because of community protests in Camperdown and Mdloti. The stations have now opened in co-operation with the security.”

Mashinini says a presiding officer in the eThekwini Metro was arrested after allegedly stuffing marked ballots into a ballot box.

“The matter is now in the hands of the South African Police. This incident did not affect voting, is a testament to the in-built safeguards in the voting process that also include an active role for party and independent candidate agents.”

Below is the briefing: