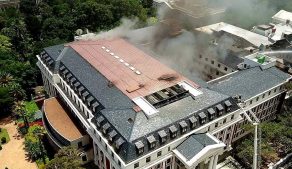 The City of Cape Town’s Fire Department never raised the issue of the non servicing of the sprinkler system in the previous pre-State of the Nation Address Fire Inspection Report to Public Works.

This is according to the Department of Public Work’s regional head of Construction Projects responsible for Parliament Thembeka Kolele.

She was briefing the Joint Standing Committee on the Financial Management of Parliament. The meeting is focusing on the recent fire that broke out in Parliament.

One of the observations is the fire department’s report is that the fire sprinkler valves were serviced since 2017.  Kolele says once servicing is completed during pre-SONA inspections, Public Works submits the the maintenance certificates to the joint authorities which include the City of Cape Town.

“As part of the Pre-SONA preparations, the precinct buildings are assessed by the Fire Department of the City of Cape Town for by-laws relating to community safety. These inspection reports are provided to identify and address deficiencies before the event could take place. Now we’ve put a note in this presentation to say the overdue servicing of the sprinkler system was not raised in the 2020 and the 2021 Cape Town Fire Department pre-SONA reports. DPW may not speak on the 2022 report as this is relating to the active investigation.”

Lack of insurance for parliament building a real concern

Economists have warned that the fire damage caused to parliament will have a negative impact on the county’s fiscus.

The Department of Public Works and Infrastructure has announced repairs to parliament will run into billions of Rands.

Economist Iraj Abedien says he is shocked that the national treasury and the department of public works failed to insure the National Assembly building. The Department does not insure the movable assets of its clients.

As of 31st March of last year, the total value of properties under the custodianship of the department were estimated at R141 billion.

The State says it cannot afford to insure such a massive property portfolio. Abedien says, “News that the national assembly building was not insured is a real concern, it shows the absolute incompetence of the executives who are in charge of these national assets either at the Department of Public Works or National Treasury. This requires political intervention and in my view, they need to resign as a matter of self-respect.”

Meanwhile, African Transformation Movement leader, Vuyo Zungula has called for the Police Minister Bheki Cele to take full responsibility for the fire that broke out in Parliament if it turns out that the suspect is used as a scapegoat.

Zungula says the fire outbreak is a clear display of incompetence on the part of some government departments.