Political parties react to the fire in Parliament 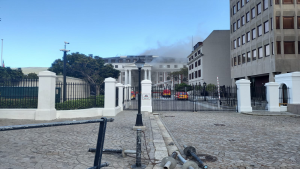 Public Works and Infrastructure Minister Patricia De Lille says the docket regarding the fire at parliament and the arrest of a 49-year-old man has been handed over to the Hawks for further investigation.
The blaze on Saturday morning has gutted the third floor of the Old Assembly Building. The roof of that structure has collapsed.
DA Shadow Minister of Public Works, Samantha Graham, says the fire could have been prevented had a report of an earlier fire been published and its recommendations acted upon.

Graham says she believes that the report on the fire that took place in parliament in March 2021 is so inflammatory, that it’s been hard to get hold of a copy.

“There just seems to be a lackluster approach to maintenance, if you go into some of the older unused rooms, they’re shambolic, so there are definitely issues. The fact that there was already a fire in march is of concern. The fact that they potentially haven’t even addressed the causes of that fire, we still haven’t received a copy of that report in our portfolio committee as to what that fire involved, what caused it, and where they were with respect to the repairs around it.”

51-year-old man to appear in court in connection with Sunday fire at Parliament in Cape Town:

‘Act of arson’
Action SA says it is appalled by what it calls “the act of arson” at parliament. Action SA says that it believes that the confirmation of the arrest of a suspect means that it is clear that the blaze was no accident.
The party says it becomes difficult to view the fire in isolation with the anticipated tabling of the State Capture Commission of Enquiry Report or the unrest witnessed in July last year.
Action SA says serious questions have to also be asked about the security and fire systems in parliament.
‘Important documents’

COPE member of parliament Willie Madisha has raised several concerns about the response to the fire. He’s also lamented the delayed alarm systems and raised concern over the safety of important documents housed in parliament.

“We’re supposed to make resolutions as a matter of urgency, you know that Zondo, for example, will be giving the report next week. But then it’s not just Zondo, ourselves as opposition parties we have in our offices important documents there. It means it’s going to be hard for us to respond. It’s not just Zondo only but a lot of things, thievery, this government, which I want to emphasise is extremely corrupt, documents are gone.”

EFF commends all efforts to put out the fire

The party urges all firefighting personnel to act with caution and “ensure none of their lives are risked  for the sake of a building.”

EFF Statement On Ongoing Fire At The Parliament Of South Africa pic.twitter.com/sljYEWB5bw

De Lille says another briefing will be held on Monday so that parliament can give an update on the situation.

“It’s confirmed that a person has been arrested, and I can also confirm from General Phathekile, that the docket has now been handed over to the Hawks because it’s the role of the Hawks to investigate any attack on political institutions. According to the report from the police, he was arrested inside parliament.”

Editor’s Note: This article was updated on Monday 3 January 2022 to reflect the correct age of the suspect. He is 49 years old Not 51 years as earlier reported.
3 days ago