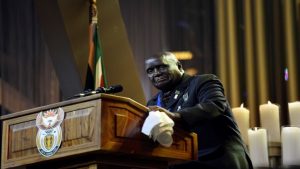 The elderly statesman succumbed to pneumonia while in a hospital in Lusaka on Thursday.

His family has expressed gratitude for the prayers and support since his hospitalisation last week.

President Ramaphosa has ordered that all national flags be flown at half-mast in remembrance of Kaunda.

“President Kaunda was a pioneering champion of a decolonised, united and prosperous Africa. He represented his country and our continent with distinction on global platforms.”

“In remembrance of this great leader, we have decided to declare a period of mourning for 10 days in his memory and for that 10 day period, our national flag will fly at half-mast,” says the President in a statement.

On Thursday, Zambian President Edgar Lungu declared 21 days of national mourning for his country following the death of Kaunda.

Secretary of Cabinet, Simon Miti, says all funeral and memorial events will be communicated at a later stage.