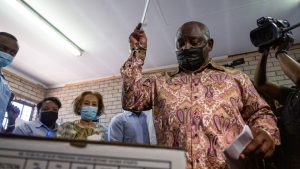 South African President Cyril Ramaphosa has urged all registered voters to exercise their right to vote in the local government elections on Monday.

Ramaphosa cast his vote at Hitekani Primary School in Chiawelo in Soweto on Monday.

Former president Jacob Zuma is expected to cast his vote at Ntolwane as he has done in previous elections.

“The person I vote for and the party or whatever the party –  I’m voting for honest people to serve the population here in Johannesburg,” says Mbeki.

LGE 2021 |  I’m glad to see that many South Africans are excited to vote: President Ramaphosa votes

Deputy President David Mabuza has cast his vote at Ajurri farm in Barberton, Mpumalanga and encouraged citizens to do the same.

According to Mabuza, the freedom that the country enjoys cost people’s lives for the right to vote.

“You are at liberty to vote for any party. This day never came easy – people fought for it. It is up to this generation to hold this democracy with both hands so that it mature and become better every day, so I’m encouraging you to go and vote,” says Mabuza.

LGE 2021 | It’s a good feeling to vote, it is an achievement: Deputy President David Mabuza votes

Former President Jacob Zuma has cast his ballot in his hometown at the Ntolwane Primary School Voting station at Nkandla in northern KwaZulu Natal. The queue at the school was very short and Zuma did not spend more than ten minutes in the area.

Zuma says he is proudly ANC and happy that he has voted.

“I’m happy, I voted, there was no problem. I’m very happy, (what did you vote for?) My vote is no secret, I vote for the ANC.  I would encourage everyone to go out there and vote. voting is very important. People should not be phased by those politicking and fighting for power and positions,” says Zuma.

In a recorded message to the nation on Sunday, Ramaphosa says the results of the elections can bring change to municipalities in the country.

He has reassured apathetic voters that each vote counts.

“I call on each and every South African who is registered to vote to go out and vote for the candidate and the party of your choice. Your vote counts. Every single vote counts. With your vote, you are building a better South Africa. A South Africa with strong, well-run and effective municipalities that can improve the life of every citizen. Local government elections are about the issues most to all of us; housing, electricity, water, sanitation and decent roads,” says Ramaphosa.