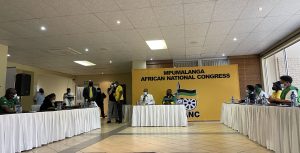 African National Congress (ANC) President Cyril Ramaphosa is expected to engage with communities of Tekwane South and KaMagugu near Mbombela in Mpumalanga as part of the party’s election campaign.

Sunday is the last day of the voter registration weekend ahead of the November 1st  Local Government Election.

Ramaphosa will visit voting stations in and around Mbombela.

He will also be briefed on the construction of a bridge connecting KaNyamazane and Tekwane south that collapsed early this year.

South African Citizens are encouraged to visit voting stations to register and also to check whether their names appear on the voters roll.

On Saturday, the ANC was camapigning  in Soweto.

Ramaphosa was greeted by dozens of protesters during his party’s election campaign in Naledi.

On Saturday, the ANC was camapigning  in Soweto.

But President Ramaphosa says after meeting with Public Enterprises Minister Pravin Gordhan, Eskom will soon be working to resolve the electricity problem in Soweto.

Currently, Soweto owes Eskom over R7 billion in paid bills making it difficult for the power utility to buy new transformers and improve its electricity distribution in the township.