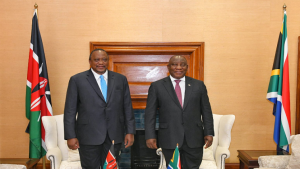 He was speaking during his opening remarks following Kenyan President Uhuru Kenyatta’s state visit at the Union Buildings in Pretoria.

Both countries have ratified the African Continental Free Trade Area which seeks to ensure African states trade amongst themselves.

Currently, the intra-Africa trade is standing at less than 15% compared to over 60% in Europe.

Again with two-way trade of R7.2 billion for South Africa against R329 million for Kenya, President Ramaphosa says this has to change.

He says they need to ensure fair trade between the two countries.

Ramaphosa says their historic ties are rooted in Kenya’s principled support for our struggle for liberation, racial equality and democracy.

“For this, we remain eternally grateful to the people of Kenya.  Solidarity, mutual respect and a common vision of a better Africa and a better world form the foundation of our relations today and into the future. This State Visit takes place after the successful inauguration of the Kenya – South Africa Joint Commission for Cooperation, which took place on 11 August 2021 in Nairobi.”

He says, “The Joint Commission for Cooperation provided an opportunity to take stock of our current bilateral relations while laying the foundation for more regular exchanges and meetings between our government officials, while relations between South Africa and Kenya are warm and constructive, it is time to elevate our ties to that of a strategic partnership.”

The video below is Ramaphosa’s address: