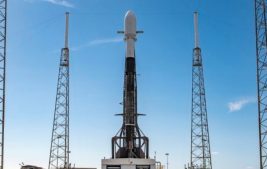 The launch comes three years since the launch of ZACube 2, which is the technology demonstrator for the MDASat-1.

He says the launch will further cement South Africa’s position as an African leader in small satellite development. The satellites will be used for surveillance of oceans and environmental projects.

The full MDASat constellation will be of nine cube satellites that will detect, identify and monitor vessels in near real-time in support of South African maritime awareness.