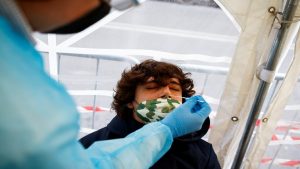 South Africa has reported 1 691 new COVID-19 cases, which brings the total number of laboratory-confirmed infections to 3 560 921.

This increase represents a 9.3% positivity rate.

Due to the ongoing audit exercise by the National Department of Health (NDoH), there may be a backlog of COVID-19 mortality cases reported.

21 815 463 tests have been conducted in both public and private sectors.

The majority of new cases today are from Gauteng Province (27%), followed by Western Cape (19%).