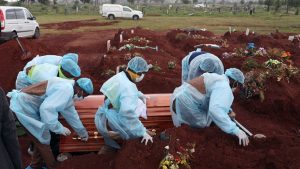 The National Institute for Communicable Diseases says more than 2000 people have succumbed to COVID-19 related complications since the beginning of this week.

Meanwhile, Acting Health Minister Mmamoloko Kubayi says KwaZulu-Natal)KZN) has activated a coronavirus surge response team to deal with the projected rise in infections in the province in the next few weeks.

This comes follows riots and looting in the province recently. Kubayi who was in Durban to monitor the COVID-19 vaccination roll-out told the media that the recent unrest had negatively affected the province’s vaccine rollout.

“Super-spreaders always present a surge in the area,  that is why we are talking about a surge response.  Part of what we had to go through this morning was to look at reassessing our surge response, looking at hospital capacity, in terms of beds, in terms of field hospitals,” says Kubayi.

Kubayi says the department is confident that the province will be able to respond appropriately should it experience a surge in CCOVID-19 cases.

“We are comfortable in terms of capacity in the province to be able to respond should we have a surge. Indeed we do always have projections, our epidemiologist will always give us that if you have these instances, this is what comes. The numbers in Gauteng were driven by gatherings that we were seeing – the marches that we were seeing,” says Kubayi.