SAA to resume operations in September 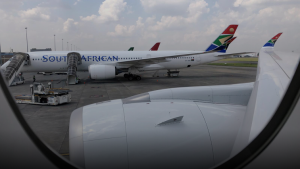 South African Airways (SAA) has announced it will take to the skies in September. The airline says in a statement that it will resume operations on the 23rd of September.

Interim CEO, Thomas Kgokolo, says they will start operating flights from Johannesburg to Cape Town, Accra in Ghana, Kinshasa in the Democratic Republic of Congo, Harare in Zimbabwe, Lusaka in Zambia, and Maputo in Mozambique.

Kgokolo says the aviation sector is currently going through a testing period and that the airline under new management is aware of the challenges that lie ahead.

However, Deputy President of the South African Cabin Crew Association, Christopher Shabangu, says they are surprised.

“From the union side, we are surprised. We didn’t know as to when this was going to happen. We can only welcome the news, but it opens up a lot of questions. It should be done in a way that it’s understood by everybody.”

The wait is finally over. In just under a month, the striking and familiar livery of SAA will once again be visible in the skies as the airline resumes operations. The carrier has confirmed the first flights will commence on Thursday, 23 of September 2021. #FlySAA pic.twitter.com/6fkmL5z6Ym

Slow progress to the launch of the new SAA: