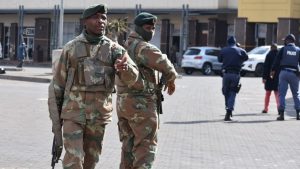 The South African National Defence Force (SANDF) says they are ready to support the police in ensuring law and order during voting on Monday.

SANDF Spokesperson, Brigadier General Mafi Mgobozi says the 10 000 soldiers have been deployed around hotspot areas and at national key points around the country.

“And one of the things that our soldiers are going to do is to guard voting material storage of the IEC (Electoral Commission of South Africa) and also to help with the transportation of materials in inaccessible areas. And others will be on standby for anything which could happen when the police need them and support them our soldiers will respond and go support them,” says Mgobozi.

More than 300 voting station hotspots have been identified across the country where law enforcement agencies will be deployed.

LGE 2021 | People should not expect to see any SANDF troops at polling stations: Pikkie Greeff