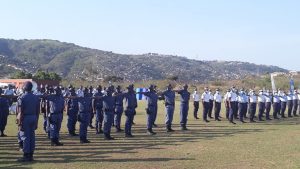 House robberies, car hijacking and business robberies, or crimes now known as “trio crimes” are among the issues being addressed by the South African Police Services (SAPS) Country in Blue concept.

The concept was launched at the weekend at Inanda, in Durban.

#sapsHQ Amaoti, KwaZulu-Natal: From sunset to sunrise, in all corners of the country 🇿🇦, all #SAPS vehicles fitted with blue lights will now be driven with the blue lights switched on from 18:00 to 06:00 in order to increase #PoliceVisibility. #CountryInBlue ME pic.twitter.com/bp8qnHUMXD

National Police Spokesperson, Colonel Athlenda Mathe says there is also a drive to get more officers on the ground.

“We have launched the country in blue operational concept which aims to heighten police visibility across the country. So, the strategy espouses an integrated and collaborative approach, working closely with all civil society and government agencies. Through this, all operation SAPS vehicles on the road will have their emergency blue lights switched on from sunset to sunrise – additional vehicles will also be marked to ensure that police presence is enhanced,” says Mathe.

[SA IS NOW ON] Leading from the front, Police Minister General Bheki Cele leads the #CountryInBlue 18:00 switch on, of all @SAPoliceService vehicle emergency blue lights. pic.twitter.com/EnQ5rgdVoj