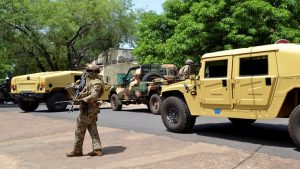 Seven Malian soldiers were killed on Saturday in two separate attacks on patrols in the centre-west of the country, the army said, the latest bloodshed to indicate violence is shifting southward into previously peaceful areas.

At around 11:20 GMT an army escort was ambushed near the town of Mourdiah, around 200 km (120 miles) north of the capital Bamako, killing two and injuring three, the army said in a statement published on Facebook.

“A sweep of the area where the incident took place led to the arrest of two suspects who were immediately handed over to the gendarmerie,” the army said, without accusing a group of responsibility for either attack.

Armed attacks by Islamist militants and other groups are common across vast swathes of Mali and its neighbours Burkina Faso and Niger, despite a heavy presence of international troops. Thousands of civilians have been killed and millions displaced.