Shoba&#8217;s defence lawyer accuses Malepane of being a liar 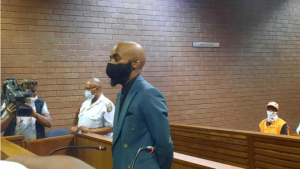 Nthuthuko  Shoba’s defence lawyer, Norman Makhubela, has accused state witness Muzi Malepane of being a liar who changes his story when it suits him.

Malepane had been on the stand at the High Court in Johannesburg since Tuesday.

He has accused Shoba of being the mastermind behind Tshegofatso Pule’s murder.

Pule was murdered in June 2020 when she was eight months pregnant.

Makhubela accused Malepane of being a liar, calling him creative as his initial statement to the police after his arrest differed from his plea statement and court testimony.

Makhubela questioned Malepane on which one of his statements was the correct version.

“You are very creative in crafting lies. You changed your statement because there was no way you could have succeeded in pinning Shoba to the scene.  I put it to you that you keep changing direction and different stories and then the court must decide which the correct version is,” said Makhubela.

Makhubela asked Malepane to tell the court about the events that unfolded after he picked up Pule from Shoba’s home in Florida.

Malepane says he drove towards Main Reef Road and instead of going toward Meadowlands where Pule resided, he drove to Noordgesig.

“She asked why are you not taking me home, I told her I was picking up something. I parked, opened the door, grabbed her by the hand and told her to get out and shot her. Then put her in the backseat. After the mandate things didn’t make sense. I didn’t have the guts to hang her alive,”  he said.

The family could not hold back their tears, some even walking out of the courtroom.

Malepane is back on the stand on Friday as the trial continues.