Some Mexicans seek out new jabs as US border restrictions relax 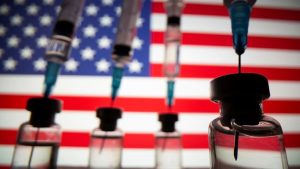 Mexicans who need to cross the US land border for work or school are scrambling to get approved COVID-19 vaccines ahead of new rules set to go into effect next week, 20 months after the United States shut crossings for non-essential trips.

The rules specify that beginning on Monday only foreigners who have received World Health Organization-approved vaccines can cross, which effectively bars those who received jabs including China’s CanSino Biologics and Russia’s Sputnik V, among others.

“I’m thinking about (flying) to Los Angeles to get a vaccine that will then let me cross,” said Jose Gonzalez, a teacher who is a resident of the Mexican border city of Tijuana. Gonzalez, a Mexican national, noted that he was first vaccinated with the CanSino shot only because he had no other choice.

“Now I regret that,” he said, explaining that his work requires him to frequently cross into the United States.

More than 15 Mexicans told Reuters that the were looking to get re-vaccinated, not with booster shots, but rather to simply comply with the new entry rule, which requires would-be border crossers to show proof of their vaccine status and will be enforced with random checks.

The vaccine rule marks the latest obstacle faced by Mexican border residents, many of whom for years have crossed for jobs or classes, including many from families with mixed immigration status or even duel nationalities.

“We’ve had a very rough time during the pandemic, like not being able to cross the border for emergencies like when a close relative died, and now we have to deal with this,” said Gabriela Preciado, a Tijuana resident and professor who also got the CanSino jab because it was the only one available at the time.

Some have already made especially long trips to meet the new rule.

“I went to Mexico City, and from there took a flight to Los Angeles,” said another Tijuana educator, who declined to provide his name for fear of problems with border agents.

“It’s very important for me to be able to cross,” he added, describing his circuitous journey as both costly and risky.

Health officials with the state of Baja California, home to Tijuana, said there are currently no plans to offer the internationally approved vaccines to would-be border crossers.

Last year, facing delays procuring vaccines including from US drugmakers, the Mexican government sought out millions of doses from both China and Russia.

While coronavirus infection rates have dipped recently in Mexico, it remains one of the pandemic’s hardest hit nations globally, with a confirmed caseload of more than 3.8 million plus at least 289,000 deaths, according to health ministry data.