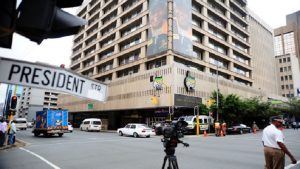 Some Soweto community leaders say they encourage residents to vote in this year’s elections, after handing over their pledge to African National Congress (ANC) Regional Executive Committee Member, Stan Itshegetseng.

Hundreds of residents from Soweto have marched to the ANC headquarters at Luthuli House in Johannesburg, saying they are unhappy over housing issues and service delivery.

A group of Soweto residents voices their grievances during a march to Luthuli House:

They earlier vowed to boycott the elections, as voting in the 2021 local government polls continued across the country.

One of the community leaders, who has not been named, says they are pleased to have their voices heard.

“Finally, Luthuli House has sent one person to come and receive our pledge. It is not a memorandum. We are encouraging everyone today to go and vote because, on the pledge, we indicated that if we don’t receive any response by 9 o’clock, it means all these people are not going to participate in the election. We know why we are coming here to Luthuli House because it is only them who can give us what is on the pledge. So, we are going back to vote in Soweto.”

Hundreds of residents from Soweto marched to Luthuli House: