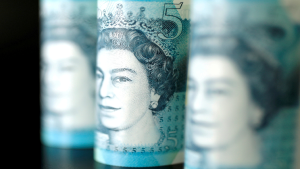 The Sterling firmed a touch on Thursday against the euro and the dollar as investors assessed whether the Bank of England would proceed with an interest rate hike at the upcoming meetings or hold fire, given concerns around economic growth.

Projections of lower borrowing ahead took longer-dated gilt yields 10-14 basis points lower on Wednesday, though the pound displayed little reaction to the budget, focusing instead on what the BoE might do at its November 4 meeting.

This morning sterling gained 0.2% to $1.375, with the dollar on the back foot amid a general recovery in market sentiment.

Against the euro, the pound was modestly firmer at 84.35 pence and holding off 20-month highs hit earlier this week on bets around diverging central bank interest rate expectations.

Markets are pricing a chunky 34 cumulative bps in rate hikes rise from the BoE by year-end, while the European Central Bank’s meeting later on Thursday is expected to reinforce the view that rates will not rise for some years.

However, while the pound has firmed around 1.7% in October against the greenback and the single currency, many analysts doubt it can build on those gains without a significantly hawkish message from the BoE next week.

“With around a 15 bp rate hike already priced into November’s meeting it is unclear why sterling would rally on the announcement of a 15bp rate hike,” Nomura analyst Jordan Rochester said.

“The BoE may not be as hawkish as the markets are pricing into the front-end. The Fed may deliver a more hawkish message,” he said of the US central bank which also meets next week.

He advises clients to sell the pound against the dollar to target $1.34 though he sees scope for it to firm against the euro.

not her potential source of pound pressure is the post-Brexit wrangling between Britain and the European Union, which alongside supply chain issues may cap growth.

While EU-UK talks are ongoing around Northern Ireland, fishing disputes took another turn, with France seizing a British trawler fishing in its territorial waters without a licence.

Paris is threatening to impose extra customs checks on British goods entering France from next week if the fishing spat is not resolved. That raises risks of more economic pain before Christmas for Britain.

“(The budget office) has not upgraded its still pessimistic view on the UK’s long-run economic prospects. Growth remains at around the 1.6-1.7% rate by the end of the forecast,” they added.