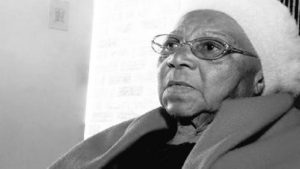 The African National Congress (ANC) has announced the passing away of struggle icon, Mama Lillian Diedericks. She passed away at the age of 96 on Tuesday morning.

Diedericks was the founder of the Federation of South African Women (FEDSAW) and 1956 Women’s March leader.

In the 1950s, Diedericks became politically active through her involvement in the powerful labour movement, particularly with the Food and Canning Workers’ Union.

She was among the leaders of the 1956 Anti-Pass march to the Union Buildings, alongside Helen Joseph, Lilian Ngoyi, Sophie de Bruyn and Rahima Moosa.

In April 2018, President Cyril Ramaphosa honoured Diedericks with National Orders, specifically the Order of Luthuli, the highest honour that can be bestowed on an individual, for her contribution to the liberation struggle of South Africa.

ANC Eastern Cape Provincial Secretary, Lulama Ngcukayitobi says Mama Lillian Diedericks was a phenomenal human being: “Let us preserve her legacy by ensuring that South Africa remains a non racial, no sexist society where everyone has an equal opportunity to thrive and prosper. We dip our revolutionary banner in honour of this heroine of our liberation struggle.”

Ngcukayitobi added: “We send our sincere and profound condolences to her family, friends relatives  and the broader community of Nelson Mandela Bay.”