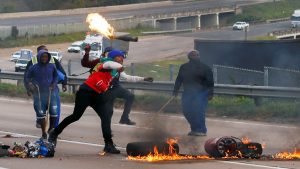 The Hawks have confirmed the arrest of a 31-year-old suspect for inciting public violence.

Spokesperson Katlego Mogale could neither confirm nor deny reports that the suspect is a Fees Must Fall activist.

It is believed that the alleged incitement took place on social media during last month’s unrest in KwaZulu-Natal.

More than 350 people died in the unrest in the province and in Gauteng and billions of rands’ worth of properties were damaged.

Mogale says the suspect will appear in the Durban Magistrates’ Court on Monday.

“On Friday the 20th of August, Hawks members from crime against the state team arrested a 31-year-old suspect for incitement to commit violence. It is alleged that suspect was involved in the incitement of public violence through social media and other platforms during the period of the unrest in KwaZulu-Natal. He was arrested in one of the higher learning institutes in Johannesburg and was escorted to KwaZulu-Natal where he was detained.”