The fate of the 2016 local elections moment – promises, history and voter verdicts 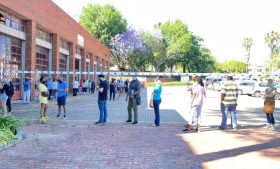 Today South African citizens and voters, by voting in the local elections or abstaining, will mark this elections day as a historic moment.

Election Day of 1 November 2021 will confirm or invert the 3 August 2016 moment when it was confirmed that the African National Congress (ANC) had suffered notable losses in the metros, in particular also those of the provincial heartland of Gauteng.

The 2016 moment of slippage was traumatic for the ANC. It had believed firmly in its own invincibility, beyond the Western Cape. As the 2016 vote counts streamed in and statisticians and political analysts took stock, it dawned that the hitherto hegemonic party was no longer in control of this symbolically and strategically important part of South Africa.

There were stunning moments of shock as results maps changed colour and political character. The voters were speaking, again, both by specific party choice and by selectively turning their backs on the right to vote – the latter was seen as a relatively loyal way of reprimanding the governing party.

The trauma that the ANC as the predominant party suffered was seen in the coalition government battles fought in the five-year interregnum from 2016 to 2021. Through multiple coalition manoeuvres, it worked to regain control, not just in metros but in a range of local municipal councils in Gauteng and beyond.

Faced with the test of Elections 2021 verdicts the ANC’s campaign comprised acknowledging mistakes in local governance, apologising, promising that it has learnt its lessons and is taking corrective steps, and detailing a few tentative legislative and institutional reforms. The voters’ collective verdict – in voting and possibly as strongly by abstaining – is pending.

Will the moment of 2016 be confirmed, in further decline, or will the ANC be gaining redemption?