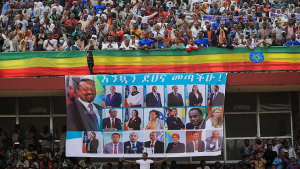 Ethiopia goes to the polls in national elections on Monday. Leading the African Union’s observer mission: former Nigerian President Olusegun Obasanjo has arrived in the country.

Over 40 political parties are participating, including that of Prime Minister Abiy Ahmed.

But not the whole country will get to vote; the national electoral board says about 110 of the 547 constituencies will have their voting delayed because of insecurity or logistical issues in the areas.

SABC News looks at one other region that will also not vote, the Northern Tigray region, which decided to hold its own polls in August 2020 and is now engulfed in a humanitarian crisis.

Ethiopia’s National parliamentary polls were scheduled for August 2020, but the electoral board postponed them citing the COVID-19 pandemic. However, the Tigray region in the country’s North defied the directives and went ahead with their own polls.

The dominant party in the region then, the Tigray People’s Liberation Party, has since been declared an outlawed group.

Conflict in the area between the government of Prime minister Abiy Ahmed and forces loyal to the party, is yet to end, after eight months. The humanitarian crisis, which the United Nations says involves over 5 million people, is threatening to dent the image of the Nobel prize winning prime minister whose party is also contesting in the 21 June polls.

Dr. Awol Allo on the pressure over the Tigray conflict and increasing humanitarian crisis in the region:

Support for people in Tigray

UNICEF Representative in Ethiopia, Adele Khodr, says over 700 000 children in the region have been displaced.

“The situation in Northern Ethiopia is very challenging as over 700 000 children are internally displaced, 1.4 million out of formal school and over 6 000 separated and unaccompanied.”

The government admits human rights violations occurred in the region and as investigations go on, some soldiers have already been convicted.

Ethiopia’s Minister of Health, Liah Tadasse, says around 67 health professionals in the area to provide support.

“To provide the necessary treatment and support to victims of gender-based violence, so far, around 57 health professionals in areas like mental health psycho-social support; are providing services in six cities and to facilitate the needed services of physical psychological social and legal services, one stop services have been expanded in different cities.”

Pressure on the Prime Minister

The international community continues to put pressure on Ahmed to end the conflict and have Eritrean soldiers leave the region.

The United States, which has put sanctions against Ethiopia because of the Tigray conflict, has said excluding people from voting is “troubling.”

US imposes sanctions on Ethiopia:

The European Union has said it regrets the impossibility of sending an observer mission.

But the government insists that the electoral process will be free and fair. Spokesperson of Ethiopia’s Ministry of Foreign Affairs, Dina Mufti, says the government is committed to fair and transparent elections.

The electoral board has not set a date for voting in the Tigray region because it all depends on when calm returns to the region.

For residents who are displaced by the conflict, elections are the least of their concerns.

The national electoral Board says over 37 million people have registered to vote in other parts of the country and it is urging those who are in areas where polling stations have been set up to make their voices heard through the ballot on 21 June.