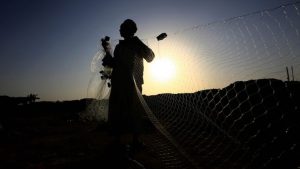 A tribal group announced on Monday it would temporarily lift a six-week blockade on Sudan’s main seaport, a week after the military took power in a coup.

Opponents of last week’s military takeover had accused the army of engineering the blockade of Port Sudan to put pressure on civilian leaders and ultimately justify plans to end civilian rule.

The army has denied being behind the blockade and declined to get involved, saying it was based on legitimate demands.

Barricades at the port and on the main road to Khartoum were being lifted from Monday morning for a month, said Abdallah Abushar, secretary for the High Beja Council, which imposed the blockade in September.
Implications of the coup:

Members of the Beja tribal group had shut the Red Sea port in September, calling for a range of demands including the replacement of the civilian-led government.

The Port Sudan blockade, which shut down Red Sea terminals and the main road linking to the capital, had resulted in wheat and fuel shortages and the re-routing of shipments through Egypt.

The group had demanded the civilian government be replaced with technocrats, and that parts of an October 2020 peace agreement with rebel groups across Sudan be renegotiated.

Last week, Sudan’s military took power in a coup, detaining civilian officials and politicians, and promising to establish a new government of technocrats.

The coup has been met with opposition and street demonstrations over the last week.

Abushar said the blockade was being lifted to allow for the establishment of the new government but would be re-instated in one month until the rest of the Beja demands are met.