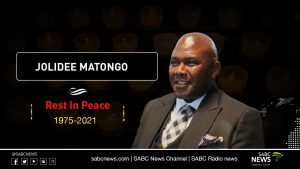 President Cyril Ramaphosa says the City of Johannesburg Executive Mayor,  Jolidee Matongo, has died at a time when he was immersed in improving living conditions and creating opportunities for all the people of Johannesburg and stakeholders in the metropolitan economy.

The 46-year-old Mayor, passed away in a motor vehicle accident after he had participated in a local government voter registration in Soweto, alongside Ramaphosa.

Acting Presidential Spokesperson, Tyrone Seale says Ramaphosa has conveyed his condolences to Matongo’s family, friends, colleagues and comrades, and the residents of Johannesburg.

“President Ramaphosa says it is hard to comprehend this tragedy, given the vitality and passion with which Mayor Matongo interacted with me and residents of Soweto so shortly before his death. Nothing could prepare any of us for this sudden loss, which has deprived our nation’s economic centre of its second Executive Mayor in two months.”

African National Congress (ANC) Chairperson in Gauteng and the Premier of the province, David Makhura has expressed shock and sadness, following the passing on of City of Johannesburg Mayor, Jolidee Matongo on Saturday evening.

Makhura, who was also with Matongo on Saturday, says his death is shocking and was unexpected, especially at a critical time where the country is heading towards the local government elections in November.

“Mayor Matongo spent the day with President Cyril Ramaphosa and Premier David Makhura in Nomzamo informal settlement in Soweto – encouraging the communities to register to vote and listening to their concerns. Premier Makhura described Matongo as someone who executed his duties with a cool and calm demeanour,” says Gauteng Premier Spokesperson Vuyo Mhanga.

NFP General Secretary, Canaan Mdletshe says the news of his death is sad and will take time to heal.

“Mayor Matongo was a charismatic individual, a young mayor, a person who was capable and had already demonstrated his willingness to change the lives of the people of Johannesburg. He had already championed and led programs that were going to assist the poorest of the poor in the City. His loss is not only going to be felt by the ANC only, but by the entire residents of the city of Johannesburg,” says Mdletshe.