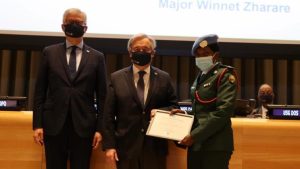 The United Nations has honoured the 117 women and men, including three South African peacekeepers, who sacrificed their lives while serving as Blue Helmets under the UN flag in various peacekeeping missions around the world.

The Secretary-General also laid a wreath at the Peacekeepers Memorial at the UN Headquarters, marking the International Day of UN Peacekeepers. A Chadian peacekeeper, who served in the Integrated Multidimensional Stabilization Mission in Mali received a medal posthumously for exceptional courage, while a Zimbabwean military observer was honoured with the 2021 Military Gender Advocate of the Year Award for promoting the principles of women, peace and security during her service in South Sudan.

Paying tribute to the fallen. While honouring the thousands of blue helmets who have lost their lives in the service of the UN and humanity since 1948.

“Our peacekeepers face great and growing challenges. Increasing political tensions. Deteriorating security situations. Ever-more complex threats, from terrorist attacks to organised crime to Improvised Explosive Devices. And a surge in mis- and disinformation that spreads hatred and fuels violence. Despite these risks, our peacekeepers press on. They work tirelessly in the toughest of conditions. They adapt to rapidly evolving situations on the ground. And they constantly innovate to protect the most vulnerable, while representing our diverse global community. They advance the greatest mission of all, peace. I am so proud of their work”, says United Nations Secretary-General Antonio Guterres.

Two SANDF soldiers and one South African civilian were also honoured posthumously with Dag Hammarskjold Medals for their service, while based in the MONUSCO Mission in the DRC, including Corporal Simanga Arthur Khuselo, who was reportedly killed by friendly fire. Lance Corporal Fhatuwani Calvin Vhengani and civilian Patrick Ntanzi both died after short illnesses while serving in the DRC. South Africa’s UN Ambassador Mathu Joyini receiving the medals on behalf of a proud nation.

“The International Day of United Nations Peacekeepers is an opportunity to honour the women and men on the front lines advancing peace around the world. We also pay tribute to the families who support their loved ones as they carry out these vital, difficult and dangerous missions, far from home”, says Joyini.

The ‘Captain Mbaye Diagne Medal for Exceptional Courage’ was awarded posthumously to Chadian peacekeeper Captain Abdelrazakh Hamit Bahar for brave service in Mali while Zimbabwean Major Winnet Zharare received the 2021 Military Gender Advocate of the Year Award for promoting the principles of women, peace and security while serving in South Sudan.

“I am humbly grateful for this award and the recognition for my service. I am certain that all nominees for this award where as capable, if not more, to be recognized today and receive this award. I would like to thank the Government of Zimbabwe for facilitating my deployment in South Sudan as a UN Peacekeeper and the opportunity for me to work as the gender focal point for the Military Observers in Bentiu, Unity State.”

The theme of this year’s observance is ‘People. Peace. Progress. The Power of Partnerships’.

South Africa is the 21st largest contributor of uniformed personnel to UN Peacekeeping while some 87-thousand civilian, police and military personnel currently serve under the UN flag.

“There is no better way to honour the memory of those who have given their lives for others than to carry forward their noble work. We will do so to achieve peace, progress, and prosperity for all peoples.”
– @Lacroix_UN, @UN Under-Secretary-General for Peace Operations on #PKDay pic.twitter.com/jLEZnCf30h