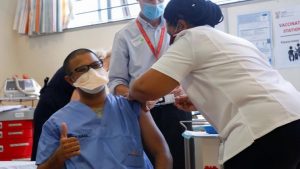 President Cyril Ramaphosa says there is light at the end of the COVID-19 tunnel – with fewer healthcare workers getting the disease at this stage of the third wave when compared to the second wave – mainly because of the vaccination of workers.

Many healthcare workers have received the Johnson and Johnson vaccine.

Ramaphosa was speaking on Tuesday night during an address to the nation – where he announced level three of the lockdown.

Ramaphosa said 64 healthcare workers had tested positive for coronavirus in the last seven day period and this is substantially less than during a similar period of the second wave – mainly because of the vaccination programme.

Meanwhile, nursing unions say they want the government to provide them with counselling facilities.

Nursing unions are reported to have said the second wave had a devastating effect on healthcare workers and many had to resign as a result of the trauma of dealing with a high number of deaths.

A total of 339 healthcare workers died of COVID-19 related illness in South Africa between March and November last year, with most deaths occurring in the Eastern Cape, KwaZulu-Natal, and Gauteng.

Rich Sicina is a nurse and general secretary of the Young Nurses Indaba Trade Union: