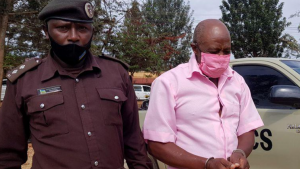 A Rwandan court will deliver its verdict on Monday in a case against Paul Rusesabagina, depicted as a hero in a Hollywood movie about the country’s 1994 genocide, but now being tried on terrorism charges.

Rusesabagina says he was tricked by government agents into returning to Rwanda from abroad last year.

He was hailed as a hero after he used his connections as the manager of a Kigali hotel to save ethnic Tutsis from slaughter during the genocide. He was portrayed in the 2004 Hollywood film “Hotel Rwanda.”

Now he is accused of nine terrorism-related charges, including forming and funding an armed rebel group. Before his arrest, Rusesabagina, who was living in the United States, was a vocal critic of the Kagame government.

Prosecutors have requested a life sentence for Rusesabagina, whose family says he is in poor health and being mistreated in prison.

Kagame became head of state in 2000 after he and his rebel forces halted the genocide in 1994 after 100 days of bloodletting and around 800,000 deaths of ethnic Tutsis and moderate Hutus.

He won landslide victories in subsequent elections, the most recent in 2017, when he won nearly 99% of the vote. He changed the constitution in 2015, enabling him to rule legally until 2034.