WARNING GRAPHIC CONTENT: Video of a two-year-old being kicked allegedly by a teacher sparks outrage 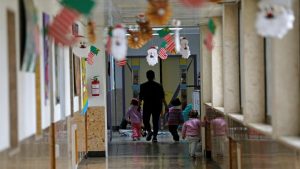 A video of a two-year-old boy being kicked allegedly by his teacher at a creche in Phoenix, north of Durban has sparked outrage among parents.

Since the video went viral on social media, more parents have come forward to allege that their children have been physically abused at the facility.

The toddler’s father says he is concerned about child’s emotional and mental well being.

“I noticed his nose was swollen. It was bruised and it was cut inside and out. I asked the teacher what happened to his face? She said that he [the baby boy] scratched himself. So I asked what happened to his forehead? She said she doesn’t know. I said I’m not happy and would like to view the footage. The injuries don’t tally with what you telling me.”

“So when I viewed it [the footage], I noticed that he was kicked. She was waving her leg underneath his legs and buttocks and she was kicking him forward and pulling him backwards towards her. She kicked him and he hit his forehead first,” explains the child’s father.

“They visited the school and viewed the entire video which made them come to a conclusion that it seems as if the video was actually edited and not to show the entire incident. It appears as if the teacher was actually rocking. The children were playing when the child fell on his forehead. It seems as if there’s no real evidence that talks to the abuse,” adds Memela.

The owners of the creche were not immediately available for comment.

In 2020, caregiver Nelly Senwametsi (42) was sentenced to 5 years behind bars by the Oberholzer Magistrates’ Court.

Senwametsi had been convicted on two counts of assault and one count of assault with intent to cause grievous bodily harm.

This after several videos went viral in April 2019 showing a childminder beating and slapping children, provoking public outrage and anger on social media – which led to the closure of the daycare by the government.

The video below is reporting on former Carletonville crèche employee conviction: