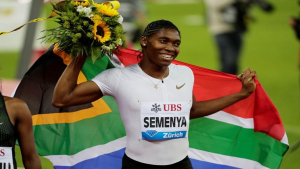 The Commission for Gender Equality (CGE) has sent well wishes to athlete Caster Semenya ahead of the 5 000m race in Regensburg, Germany which she will be taking part in on Saturday evening.

Semenya needs to run the distance in the qualifying mark of 15 minutes and 10 seconds in her last bid to qualify for the Tokyo 2020 Olympics, which are expected to start on 23 July.

The two-time Olympic gold medalist has been barred from competing in races between 400 meters and a mile unless she takes hormone-suppressing drugs.

She unsuccessfully challenged those rules at the Court of Arbitration for Sport.

In a statement, CGE chairperson Tamara Mathebula says the organisation stands behind Semenya on her refusal to take the drugs.

“We have stood by Ms. Semenya in her refusal to take the testosterone-suppressing drugs as we believe it is a violation of human rights and invasion of the privacy of female athletes. We also supported her move to take her appeal all the way to the European Courts of Human Rights, which we hope will reverse the discriminatory ban against her.”

Mathebula says she believes Semenya’s qualification would be a victory for South African women at the receiving end of unwarranted discrimination from participating in sport.

“As she takes to the tracks tonight, we would like to ask South Africans to rally behind her as the event would afford her a potential breakthrough after the many years she has spent overcoming odds in her career. We believe Caster will qualify and be part of a South African Olympic team that will proudly represent the country at the winter games.”