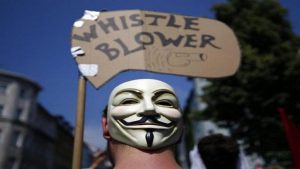 The Whistleblowers for Change body says they hope the Zondo Commission’s report will not just be another document that will gather dust.

The body, which comprises of people who testified at the State Capture Commission, say they would like to see the state implementing the recommendations made by Acting Chief Justice Raymond Zondo regarding whistleblower protection. They also believe the life of former senior Gauteng Health official, Babita Doekaran would have been spared if the state was serious about witness protection.

Whistleblowers are calling for fundamental reforms to the Protected Disclosures Act. This includes adequate protection and a whistleblowing body to be formed. Martha Ngoye testified on Prasa at the Zondo Commission.

“The pace is very slow. During his evidence at the State Capture Commission, the State President did allude to the protection of whistleblowers. Since then, what has been done to protect whistleblowers? Babita Doekaran had to lose her life. We know of witnesses, who could not even be named. We have requested that it should not be just a talk shop but something must be done.”

Whistleblowers also want South African legislation to be in line with that of the United Nations Convention Against Corruption. The UN’s policy provides for the physical protection of such persons.

Thandeka Gqubule-Mbeki testified on the Stratcom allegations at the Zondo Commission.

“The present system offers no inducement to the whistleblower to break cover. We agree that the bonafide whistleblower is activated by duty. We agree with the recommendations of the establishment of the anti-corruption agency. We further believe that such an agency should be independent and impartial.”

Among whistleblowers who responded to the release of Part One of the Commission’s report were former Bosasa Chief Operations Officer Angelo Agrizzi and the UDM’s Bantu Holomisa, who blew the whistle on the PIC. Holomisa urged whistleblowers to continue with their good work but not to align themselves with the state.

“What you are doing reminds me of a civil society, which played a major role in bringing apartheid down to its knees. I’m not implying that you must campaign against the government. But, I think you will make a big mistake if you were to allow yourself to be part of a government institution. Remain independent and be vigilant.”