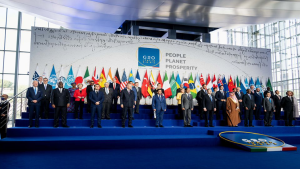 US Treasury Secretary Janet Yellen said the Group of 20 rich nations was just “a few billion dollars short” of a pledge to raise $100 billion a year to help developing nations tackle climate change, and was working hard to close the gap.

Yellen said the target number was a five-year average, and said G20 members remained “very strongly committed” to the goal.

“We’re very close to it this year. I think we’re only a few billion dollars short this year, and actually working hard, even now, to try to close the gap,” Yellen told reporters after a meeting with Irish Finance Minister Paschal Donohoe in Dublin.

Yellen said it was clearly necessary to mobilize public and private capital to help developing countries and emerging markets afford the investments needed to meet climate change obligations. “This is a very high priority,” she said.

“We’re very committed to mobilizing the promised and needed capital.” Funding is expected to be one of the biggest sticking points