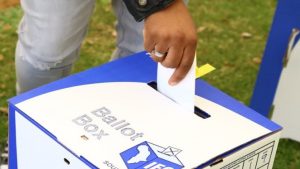 Young people in parts of northern Pretoria continue to arrive in small numbers at voting stations, with older people comprising the majority of voters.

The Tshwane Metro is a highly contested municipality with 1.5 million registered voters, and analysts are predicting no outright winner once again.

While many voters continue to trickle in at various voting stations, some young people seem reluctant to vote.

In Soshanguve and Mabopane, many are going about their day with no intention to cast their ballot. Some say they’ve lost faith in politicians and do not have any reason to vote as they remain jobless.

But some polling stations say they expect to see more young people coming in the afternoon and into the evening, as they’ve observed with previous elections.

Meanwhile, EFF leader Julius Malema has encouraged all eligible young people to make their mark in the local government elections, saying the outcome will impact the future of the country.

Malema was speaking after casting his vote in Seshego, Polokwane.

“The youth of SA must come out in their numbers because this has got to do with their future of the country, in infrastructure and service delivery. The youth must be at the forefront of such fights.”