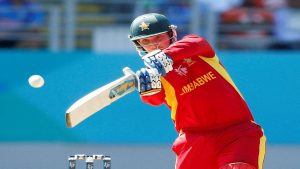 Former Zimbabwe batsman Brendan Taylor has been banned from all cricket for 3-1/2 years after admitting he received a $15,000 “deposit” for spot-fixing, the International Cricket Council (ICC) said on Friday.

Taylor said he was blackmailed and never went through with the arrangement and that he was coerced into accepting the money from an Indian businessman in October 2019.

Spot-fixing refers to manipulation of part of a game to deliver a given outcome for betting purposes.

The 35-year-old added that it took him four months to report the incident to the ICC anti-corruption unit because he feared for his safety.

In addition to four breaches of the ICC anti-corruption code, Taylor was also charged with breaching the anti-doping code after testing positive for the stimulant benzoylecognine, a cocaine metabolite, in an in-competition test conducted on Sep. 8 2021.

“Over such a long career, he participated in numerous anti-corruption and anti-doping education sessions and knew exactly what his obligations were under the ICC Anti-Corruption and Anti-Doping Codes.

“It is disappointing that a player of his experience chose not to fulfil those obligations, however he has accepted all charges, which has been reflected in the sanction.”

Taylor, who played for Zimbabwe in 34 tests, 205 one-dayers and 45 T20s, retired from international cricket in September.