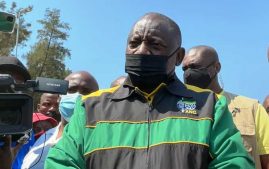 African National Congress (ANC) President Cyril Ramaphosa has described as challenging, the process of implementing the party’s 54th national elective conference resolutions, which include the “step aside” resolution.

He was speaking at Luthuli House in Johannesburg during the party’s post-election manifesto briefing. South Africans go to the polls in local government elections on 1 November.

Ramaphosa says some ANC members misinterpreted this resolution and thought they were being targeted.

Ace Magashule, the now-suspended ANC Secretary-General, was among the first casualties of the resolution.

Ramaphosa says the ANC will do more to implement resolutions including eradicating corruption in government.

“The implementation of the 54 national conference resolutions on ANC members who have been charged or implicated in corruption has been challenging, but we have largely succeeded in meeting the directives of the conference – as it was given in 2017. We raise these issues in perpetration for the local government elections because it is important for us to demonstrate to the people of South Africa that we are making progress.”

Ramaphosa says the party has taken major steps in preparing for the upcoming local government elections, by making sure that candidates possess good qualities and have the full support from the communities they live in.

Ramaphosa says ANC representatives who will be serving the public in municipalities are now selected based on their integrity and commitment. He says the ANC’s new selection process is proof the party is serious about self-renewal.

The party launched its election manifesto in Tshwane on Monday – admitting that mistakes were made – but this is a thing of the past. Ramaphosa says he is confident that ANC candidates will deliver on the party’s mandate.

“There is a fair process and that the selection of candidates is based on integrity and capability. It is not just based on popularity on how somebody can dance or sing on top of their voice. We have involved communities in the identification of candidates which is a first in our own organisation and I guess in the country as well.”

Ramaphosa says they will also intensify the process of vetting and interviewing mayoral candidates across the country.

“To continue our efforts of putting the right people into positions of responsibility – we are implementing a vigorous process of vetting and interviewing those who are selected as mayoral candidates. We have already used this process to good effect in recent months to fill some vacant positions that occurred. “