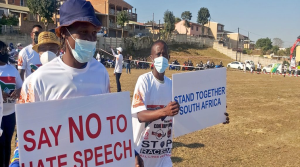 A KwaMashu resident has testified before the South African Human Rights Commission on how a group of armed people attacked him in Phoenix, Durban in July.

Mbuso Xaba told the hearing that he was in the area trying to find a petrol station.

An emotional Xaba has described an incident in which a group of young men mobbed his car and used racial slurs after accusing him of being a looter.

He says, “It pained me a lot to see that the boys that were in the car were being beaten up severely because they were throwing stones at them and some of the boys tried to run away and I could see that as they were running away one of these people fired shots directing them to the boys.”

On Monday, National Police Commissioner Kehla Sitole told the SAHRC that the country has an insufficient number of public order police officers.

Sithole said that there are only above 5 000 public order officers countrywide, while the ideal is about 12 000.

Over 350 people died and there were billions of rands’ worth of damage during the widespread unrest that engulfed KwaZulu-Natal and Gauteng.