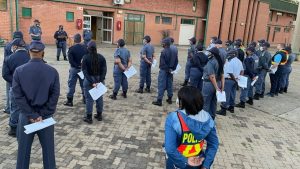 The South African Police Service (SAPS) say all measures are in place to deal with any eventualities in hotspots at KwaZulu-Natal(KZN) and Mpumalanga on election day.

The local government elections kicked off on Monday morning in South Africa.

Police have been deployed to hotspot areas.

Themba says more officers will be deployed in the KwaNyavu area in Mkhambathini, in the KZN midlands, where voting stations could not open to carry out Special Votes over the weekend.

“The KwaZulu-Natal province, which boasts 4006 voting stations, has 128 stations placed in the high-risk category. The Police Minister is sure that the SAPS in the various provinces, including KZN and Mpumalanga, have put measures in place to ensure the safety of voters, IEC officials, and the public in general. Minister Cele adds that the four provinces with areas of concern are under lock and key. The heightened deployment in identified areas during election day will remain in place, until the election results are announced on November 4,” says Themba.