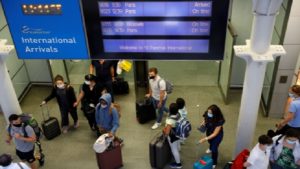 The travel sector has applauded President Cyril Ramaphosa for taking a hard line approach to vaccine hesitancy in the country. During his address to the nation on Sunday night, the President announced that he had set up a task team to undertake consultations on making vaccination mandatory.

CEO of Association Of Southern African Travel Agents, Otto de Vries says, the industry is grateful for being allowed to continue to  operate over the festive season.

“We are greatly encouraged by the President’s remarks tonight particularly, the focus on vaccinations being the right way to move forward in terms of managing this pandemic, regardless of the variants that are being identified. This will be a moving target, Enforcing and placing travel restrictions and bans is not the way to go. South Africa is not the source of this new variant, we were just quick and clever enough to share it with the world. Do not punish us for our successes,” says de Vries.

Meanwhile, the Federated Hospitality Association of Southern Africa (FEDHASA) has saluted Ramphosa for taking a firm stance against the international community, for red listing South Africa after the Omicron variant of the coronavirus was detected in the country.

FEDHASA’s national chairperson Rosemary Anderson says the President’s approach to ramp up vaccinations as opposed to shutting down the economy should be commended.

“We are absolutely thrilled by President Ramaphosa’s address this evening. We are exactly on the same line as him that we have to live with COVID and not let it ruin our economy or livelihoods. We applaud him for his stance and we hope that all South Africans will embrace what he said and use all the tools at our disposal, so we can keep our economy open. We really applaud our president with regards to the stern demands he made to the international community that had red listed us,” says Anderson.

The President also said that government is deeply disappointed that several countries have issued a travel ban on South Africa after the discovery of the Omicron variant.

He says that is a clear and completely unjustified departure from the commitment that many of these
countries made at the meeting of G20 countries in Rome last month.