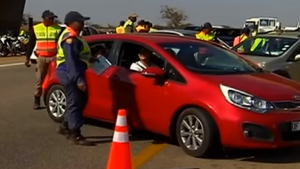 The Pretoria High Court’s decision to declare the AARTO act and the AARTO Amendment Act invalid and unconstitutional has largely been welcomed by South Africans.

The High Court found in favour of OUTA and said the proposed traffic legislation unlawfully intrudes on the exclusive executive and legislative competence of local and provincial governments, preventing them from regulating their own affairs.

OUTA’s chief executive, Wayne Duvenage says: “We are extremely pleased with the outcome and ruling and this is a win for civil society. The AARTO matter has been problematic for a long time and we have been fighting this and trying to get them to realise that this not going to work and besides the fact that it’s not going to work practically. It was unconstitutional and that is what we tackled in court and the court ruled in our favour today.”

One of the key features of AARTO is the Points Demerit system.

This is how some South Africans have responded to the ruling: “We welcome the decision by the High Court to pronounce that the demerit system is unconstitutional. This will go a long way to benefit all South Africans. This shows that the judiciary of our country is at work …”

“The AARTO judgement is a very progressive ruling because it asks government to go back to the drawing board.”