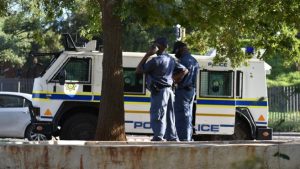 Gauteng police have launched a manhunt after six inmates escaped while on the way to court at Vosloorus in Ekurhuleni.

The incident occurred at the corner of Barry Marais and Rondebult streets.

Muridili says five of the six escapees were due at court for a Dawnpark case of business robbery, attempted murder, and possession of an unlicensed firearm while the sixth escapee was due for his first appearance on a shoplifting case.