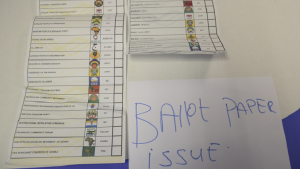 The Independent Electoral Commission (IEC) says, political parties and independent candidates intending to contest the Local Government Elections scheduled have until end of business on Monday to submit their nominations and prescribed election deposits.

This comes as judgement has been reserved in the IEC’s application to the Constitutional Court to postpone the local government elections.

In a statement, the IEC says in terms of the election timetable, the cut-off date is at 5pm on Monday.

The IEC says failure to make payment for election deposits on Monday will result in automatic disqualification of the party or independent candidate affected.

It says failure to pay deposits on due date is incapable of being remedied through a non-compliance procedure.

Below is the full statement by the IEC:

Candidate nomination closing on monday from SABC News
2 hours ago